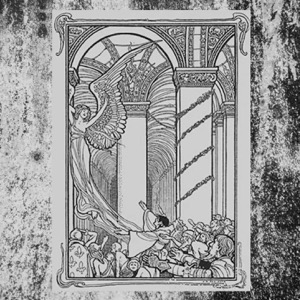 Dark ambient album based on the work of Edgar Allan Poe by english project DunJIN.

Reviewer: ianrobot - - January 17, 2018
Subject: From ATTN:Magazine
On The Conqueror Worm, the air is always thick. With distorted drones, with the diffusion of funeral bells, with shapeless fogs of low frequency. Discoloured and unclean. Somehow it feels like a warning, like the darkness of emergent cloud cover before the rain comes down. Given that the album finds its inspiration in Edgar Allen Poe’s poem The Conqueror Worm – which conjures a theatrical analogy to the inevitability of death and the futility of living – it’s only appropriate that these textures should be suspended in waiting: electronic hums hovering like silhouetted hangman’s ropes, drums made to mundanely tick toward oblivion, echoes that loiter unrequited (signals with no reply). The album rolls forth, gathering slow rhythms and dispelling them, curdling into discordance and relieving it, simmering with distortion and mellowing again, drifting onward with a dreadful, matter-of-fact assurance in where this ultimately leads.

And yet, true to Poe’s original verse, there are glimmers of beauty here. The very fact that he paints his imagery through theatre indicates that there is a beauty to this temporal choreography – a bleak acknowledgement that our very life force is derived in our fascination with how the drama is fated to unfold. Light occasionally seeps into the space like the sun outlining a door ajar: a brightness that billows off of the drones like steam, or the shimmering edges of the tambura drones that come and go. The final track on the record is a flickering wind that lays beyond Poe’s final verse, with fragments of tone travelling both forward and in reverse coupled with a reprise of the hand drum that resides at the record’s very beginning, compacting the chronology of life into the paradoxical terminus of non-existence.

Uploaded by enoughrec on January 2, 2018